I wanted to eat more than one sandwich yesterday. I did. But sometimes there’s some sort of festival going on in Prospect Park and a bunch of amazing-looking jerk chicken on barrel smokers everywhere you turn, and, well, you know. So there was no sandwich for lunch. Totally worth it, though. Also, the chicken was from a stand called “The Jerk Center,” and they’re running out of you.

The construction: One of them top-loading hot dog buns that are flat on the bottom, lightly buttered and grilled, loaded with their “Maine lobster salad,” which is just lobster meat with a little mayo, scallions and paprika.

The salad, I should note, isn’t as finely cut or heavily mayoed as lobster salads I’ve had in the past. It was basically just huge hunks of claw meat with a little bit of mayo. That’s good — if you’re eating lobster and paying for lobster, you want to taste the lobster.

I spent parts of three summers and a few winter breaks working at a huge wholesale/retail lobster market on Long Island. It was tough work, it wasn’t terribly close to my house, and the pay wasn’t great, but the people were nice, I needed a job and this one came with a t-shirt that said “Lobstertrician” on the back.

It wasn’t the hours, the heat, the often obnoxious customers or the occasional bites that got to me. It was the smell. That stench. It was something people liked upon stepping into the place: Fresh fish, saltwater, and boiling lobster. When it’s shellacked onto your skin and singed into your nostrils it becomes a different thing entirely.

I would shower after work and use four different types of soap, trying to scrub the odor off me. Nothing worked. One time, after really scouring myself, I thought I would be OK to go to the movies with a girl I was seeing. And I remember putting popcorn into my mouth, and recognizing the scent, plain as day, on my hand. Inescapable.

The massacres were something else entirely. If you read these pages with any regularity you know I don’t get too bent out of shape about invoking our food-chain privileges, but something about dumping crates upon crates full of living creatures into boiling water will make even the most ardent carnivore wax existential. I killed so many lobsters. I thought about that a lot. 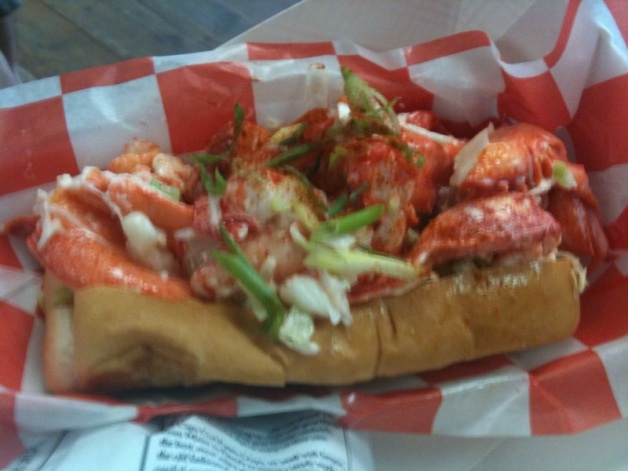 How it tastes: As you might imagine, I found it difficult to eat lobster or most seafood for years after my stint as a lobstertrician. And it wasn’t that I ate too much lobster or anything like that. It was just that smell. Any hint of it and I wasn’t hungry anymore.

I guess I’m over that now. Time will do some tremendous things for your appetite. This was a really good sandwich.

If you’re putting lobster on a sandwich, you have to let lobster do the talking. No disrespect to all the other delicious elements of a sandwich, but who wants their lobster salad indistinguishable from chicken salad?

The bread was tasty, buttery and warm, but didn’t overwhelm. Neither did the mayo, paprika or scallions. This baby was about that lobster meat, and it was tender, well-prepared (trust me, I know), rich and delicious. It was lobster meat, after all.

It wasn’t very big, though I suppose that’s sort of expected with lobster rolls. Hit the spot, though. After the jerk chicken I wasn’t exactly starving. Plus the lobster roll came with potato chips, which I’m not here to complain about.

What it’s worth: Red Hook Lobster Pound, despite a couple of huge vats of lobsters up front, didn’t really have the smell. Not sure how they avoided it. So that’s good.

But part of my issue with lobster, beyond the personal-history stuff, is that I’ve never really understood why people pay so much for it. It’s delicious, no doubt, but there are many delicious things that cost a whole lot less. Is it just a conspicuous consumption thing? Is the price of lobster driven up by their rarity? The amount of work that goes into harvesting lobster?

I don’t know. This was a $15 sandwich though, and that’s a lot of money to lay down for something that hardly constitutes a full meal. There was a good amount of fresh lobster meat on there, so I don’t doubt it would be worth $15 to anyone who regularly pays market rate for lobster. Since I rarely do, the price seems a bit silly to me. Also, it’s a big pain to get to Red Hook, even from other parts of Brooklyn.

But again, it was delicious.

The rating: 90 out of 100. To some, the Maine Lobster Roll will seem great and a great value, to others, it will seem a bit overrated and too expensive. But it is inarguably excellent. Oh, and it’s from New England. Tom Glavine.