Meant to write this up earlier but then suddenly Jose Reyes was on the stupid Marlins.

The construction: Pork (in little pieces, not quite ground but definitely not pulled) in some sort of sweet seasoning with a thin slice of Vietnamese ham, cucumbers, jalapenos, cilantro, pickled daikon and carrots on french bread. When I ordered, the man at the counter asked if I wanted it spicy. I said yes, as I always do.

Important background information: I can’t put a finger on exactly what I’m looking for in a banh mi, but I know I’ll know it when I taste it. It has become something of a white whale. Actually, I should amend that: I’m looking for a Southeast Asian-inspired sandwich that ranks among the inner-circle Hall of Famers reviewed on this site, if not necessarily a banh mi proper. I’m pretty sure I’ve had one in the past, from the now-defunct Lower East Side Cambodian restaurant Kampuchea, long before I reviewed sandwiches on the Internet.

(Whoa: A quick Google tangent tells me that the chef at Kampuchea now owns a sandwich shop with two locations in Manhattan called Num Pang that I’ve been meaning to get to. So that just jumped up my list.)

Anyway, I’m soliciting recommendations for great banh mi and banh mi-esque sandwiches. I know the one I’m looking for is out there somewhere. It is not at Banh Mi Saigon, but you’ll find out about that in like three seconds. 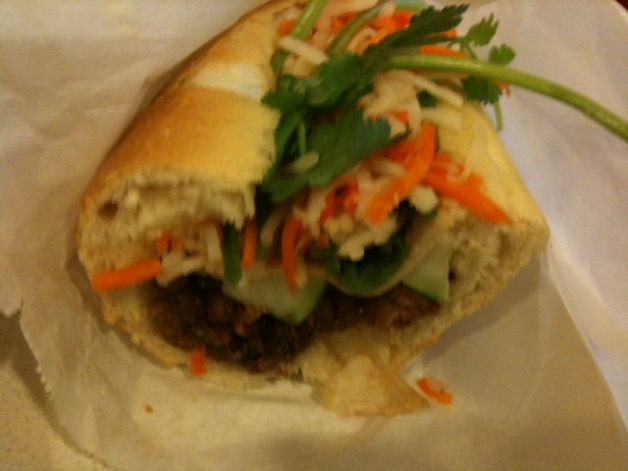 How it tastes: Delicious, but I knew immediately that my banh mi hunt would continue.

The flavor here was nearly perfect: Whatever was seasoning the pork had a pleasant sweetness to it that jived with the tanginess of the daikon and the sharpness of the cilantro. And the bread was good too: Crusty, toasty, tasty, bready. fresh-tasting. The whole works. How you want bread to be.

And the single slice of ham, though barely noticeable, presented just a hint of familiar cold-cut flavor, something vaguely grounding: This sandwich reminds you that it is a sandwich. I’m for it.

It wasn’t particularly spicy though. I’ve found there’s a pretty massive variance in the spiciness of jalapenos, and maybe the lot on this sandwich just happened to be underwhelming. More on that in a minute.

And more than anything, I wanted it to be, well, wetter. It was unclear if there was any sort of dressing on the sandwich, and if the pork was in a sauce, not much of it made it onto the bread. Usually dryness is not a problem associated with any type of pork sandwich given the greasiness associated with that meat. And on a banh mi in particular you’d think some of the vegetables might make it almost soggy. Yet this sandwich clearly needed some sort of moistener.

There was a bottle of sriracha on the counter near where I ate, so I squirted a generous serving on the second half of my sandwich, and then whoa nelly. Something about the hot sauce amplified all the awesome flavors of the meats and vegetables, plus gave the whole thing more moisture and spiciness. The sauce catapulted the sandwich to obvious Hall of Fame levels, and the rest of the sandwich was devoured in delirious sandwich frenzy.

How it rates: 91 out of 100. A deserving Hall of Famer, but not the no-doubt first-ballot inner-circle guy I’m looking for.