This odd piece about Texas Rangers’ ownership and front-office politics gives me an excuse to talk about Nolan Ryan. 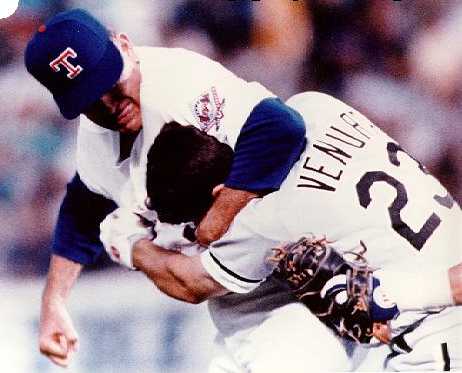 Ryan will apparently be back as Rangers president next year, and I’m glad. The Rangers are brimming with young arms, and under Ryan’s leadership, the team has taken the emphasis off pitch counts and innings limits.

Interesting. Not necessarily good or bad, but interesting, for sure.

Pitchers, like all players, are huge investments these days, so it makes sense for teams to try their best to protect them. On the other hand, and as Ryan points out, pitchers seem to get hurt pretty frequently under strict pitch counts and innings limits.

My colleague Mike Salfino has been on a campaign to expose the various shortcomings of the so-called Verducci Effect for a while now, and he makes a lot of good points. So does David Gassko at the Hardball Times.

I would guess — and this isn’t really much of a leap — that some pitchers are more prone to innings- and pitch-related fatigue than others. But teams are cautious enough with pitchers that no one ever gets the chance to show he can be the next Nolan Ryan.

Nolan Ryan, then, will give his pitchers the chance to be the next Nolan Ryan. He’s the perfect guy to do it, too: A tough, old Texan who isn’t afraid of the criticism he will inevitably face if one of his prized young arms does get hurt.

I never loved Ryan when I was a kid and he was still pitching. My dad thought he was about the coolest guy in the world because Ryan was the last Major Leaguer older than he was. I thought he was a bit overrated, and he was never as good, in my head, as Tom Seaver must have been.

But what I failed to appreciate about Ryan then was the value inherent in his ridiculous durability, the same thing that allowed him to pitch effectively into his mid-40s. From when Ryan broke into the Mets’ rotation full-time in 1971 to his last full season in 1992, he averaged 226 innings. Over 21 seasons.

In that time, he started more than 25 games in every season but strike-shortened 1981. He started 30 or more in 16 seasons, and from 1972 to 1977 — arbitrary endpoints, for sure — he averaged 287 innings a year while leading the league in both strikeouts and walks in five of the six seasons.

That’s a lot of pitches.

Also, one time Nolan Ryan kicked the living crap out of Robin Ventura. This is up there with my favorite things to happen on a baseball field, and has to go down in history as one of the greatest displays of old-man strength of all-time.

I love how nonchalant Ryan is when Ventura comes charging at him. I assume Ryan said something like, “You wanna dance?” in a good Clint Eastwood growl. Or, alternately, he just said “Texas!” every time he punched Ventura in the head, because that’s generally what I imagine Nolan Ryan saying whenever he does anything.

1 thought on “An excuse to talk about Nolan Ryan”