I got a desperate text message from my old friend Charlie yesterday. It said this: 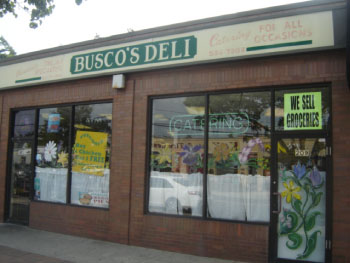 Buscos is no longer. RIP Full Bird, you will be missed.

My heart and mind raced. I furiously began texting him back, peppering him with questions about what happened. He didn’t know. He just knew it was gone. Busco’s is gone.

Busco’s was not the best deli in Rockville Centre, N.Y. Not even close. That honor belonged to E&W, right across the street, or my former employer DeBono’s, a bit off the beaten path.

But Busco’s boasted something none of the others could. The Full Bird. Her majesty.

There’s nothing particularly notable about a chicken cutlet hero with bacon and american cheese. Hell, something similar is on the specials board at every deli in America.

Busco’s did theirs particularly well, though. The proportions were great, and they sliced up the chicken cutlets into thin strips and piled them on the bread, maximizing delicious surface area and minimizing the all the inherent problems prompted by oddly shaped chicken cutlets. Every bite of every full bird had chicken, bacon and cheese on it. That’s important. Sandwich uniformity should not be underrated.

And the Full Bird is notable because it was the first of its kind in Rockville Centre, or at least the first I became familiar with. Before high school, my friends and I ate at Taco Bell and the McDonald’s Express. We were middle schoolers, so we didn’t have much money.

But in my first few weeks of football practice in high school, an older guy named Nick De Luca — a Mets fan, I know, so maybe he’s reading somewhere. Whatup De Luca? — took me to Busco’s and introduced me to the Full Bird.

Holy lord. I had eaten sandwiches before, of course, but usually the type we made at home on Pepperidge Farm bread with cold cuts from the supermarket. Not like this. This was a sandwich to make you love sandwiches. It was the sandwich that made me love sandwiches.

Football practice is an exhausting thing, and something that works up an appetite that can only be sated by piles of fried protein. We ate a whole lot of Full Birds those days. I never really gained any weight from them because we were exercising so much, but I realize now that I probably shaved about five years off my life with all the cholesterol. Whatever. Totally worth it.

And I would be remiss if I eulogized Busco’s without mentioning its best-ever employee. Busco’s was a true local place, the type where you recognized all the guys behind the counter. There was the mustache guy who I think was the owner, and that guy Pete who went to school with my brother, plus the older brother of that kid Jimmy from my Little League team.

And then there was Pat Greenfield. I should note that when I reminisce here about people from Rockville Centre I usually use made-up names so no future employer Googles them and ends up here to find me poking fun of them. But Nick De Luca and Pat Greenfield are real. These men deserve to be celebrated.

Greenfield was nothing short of the most legendary deli man in town history. A hero of heroes. When I went into the trade myself years later, I emulated Pat Greenfield. He was a hulking guy and I think a stud pitcher on the high-school baseball team a few years earlier. He wasn’t much one for conversation. He just made sandwiches.

But oh, how he made them. Oh, oh, oh. It’s not just about the amount of meat, though Greenfield gave you a ton. It’s about the proportion. The right mix of meat, cheese, bacon and dressing. And Greenfield — I don’t know if he studied or trained or just had an innate knack for it — he was the master. People in line would let other, less savvy customers cut ahead so they could get a Greenfield sandwich. Worth the wait.

Sometimes, when bragging about my own impressive abilities as a deli man, I claim this story for myself. But that’s a lie. It’s part of the Greenfield legend:

One time, my dad and I were waiting on line for sandwiches at Busco’s. Full Birds, no doubt. Greenfield was behind the counter working on someone else’s. He spun around to ask the person if she wanted tomatoes on it, but in so doing, he lifted up the sandwich and presented it to the crowd. And it was beautiful. It sparkled in the flourescent light, that signature Greenfield mix of ingredients.

There are people who are paid to dress up food for advertising photo shoots, and I can guarantee none of them has ever created a sandwich that looked like that one. It was perfect. It epitomized what sandwiches should look like. The crowd gasped. Seriously. A deli full of hungry, chatty customers fell silent at the sight of Greenfield’s hero.

Now Busco’s is no more, and Greenfield has gone off to who knows where. Hopefully he’s making sandwiches somewhere. He doesn’t know me, but maybe he’ll find this and agree to come to my house to make me some sandwiches.

UPDATE, 8:05 p.m.: Just got a call from Charlie with an update. He called the nearby deli rumored to be taking over the Busco’s location, and it turns out commenter/Watson elementary school alum BHorn is right — Busco’s is taking over that deli, and not the other way around.

So Busco’s will be moving one town away, but the girl who answered the phone assured Charlie that the Full Bird would soon be added to the menu. As Charlie put it, “Like a beautiful bacon-filled Phoenix rising from the ashes.”

I’ve also since been informed that Pat Greenfield is indeed still making tremendous sandwiches, just now at the aforementioned E&W Deli across the street. And someone else pointed out that this post will ultimately be sent to him and he’ll inevitably read it. Which is a bit awkward since, like I said, he has no idea who I am. But thanks for the sandwiches, dude. Your efforts are appreciated.

39 thoughts on “The sandwich that made me love sandwiches”