The fear is that a player could be elected and then exposed as a steroid user. But voters have already taken that risk, because we will never know the complete roster of steroid users.

Guessing is dubious. The first player who tested positive, in 2005, was a speedy outfielder named Alex Sanchez. Did anyone ever look at Jason Grimsley, a nondescript middle reliever, and think hardcore steroids user?

Maybe Bagwell took steroids, maybe not. Bagwell played most of his career before testing, but so did everybody else who has ever appeared on a Hall ballot.

I’ve been avoiding the Hall of Fame debate here because most of it has gotten so loud and stupid that I stopped paying attention. But when I saw the sacred name of Mike Piazza sullied in the Daily News this morning, I figured it was time to chime in. 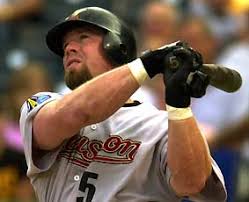 Kepner’s entire piece is worth a read. He nails it. It’s unfair to punish players simply for playing in an era when the league (and the journalists covering it) failed to do anything to stop cheaters.

I don’t get too worked up over the Oscars or the Grammys or the Gold Gloves or even the MVP and Cy Young Awards. I’m arrogant enough to be confident in my opinions, and no academy of voters is ever going to convince me that The English Patient was a better movie than Happy Gilmore.

But I care about the Baseball Hall of Fame. It is our most comprehensive monument to our greatest thing. I like Cooperstown; every single store and restaurant is baseball-themed. It’s like Mecca.

And if Barry Bonds and Roger Clemens and — more ridiculously — Mike Piazza are somehow not enshrined in the Baseball Hall of Fame, then the place becomes a total joke.

I mean, holy hell, if we’re making character judgments based on guilty-until-proven-innocent speculation, Roberto Alomar — who likely will be elected to the Hall of Fame — has been sued by two different women for knowingly exposing them to AIDS. Alomar should be a Hall of Famer, and I don’t know that he actually has AIDS or actually did anything wrong. But he’s basically been accused twice of attempted murder.

And people aren’t voting for Jeff Bagwell because they think he might have done steroids even though there’s no concrete evidence to suggest it.

None of Bonds, Clemens, Piazza and Bagwell were ever punished by Major League Baseball for doing whatever they did, if they did anything. It’s ridiculous to try to punish them now. The Hall of Fame should just eliminate the character clause from the voting criteria and focus on honoring the best players.