I got a good email this morning from reader Hank, who is frustrated both by the Mets’ apparent inaction on the free-agent market this offseason and by the nagging insistence on “payroll flexibility” that keeps popping up in interviews with team brass. He suggests — perhaps accurately — that the term could be a euphemism for, well, complete payroll inflexibility: an utter lack of money to spend. 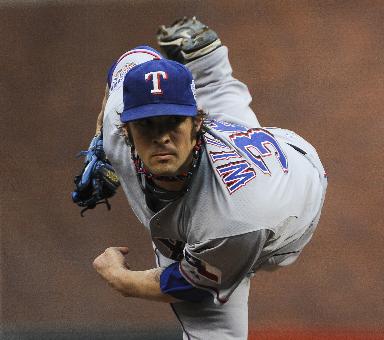 I don’t know. There’s plenty more Mets stuff to talk about on the horizon this offseason, and plenty more time to hash out what it is they mean when they talk about payroll flexibility. But there really is something to the idea, regardless of if it’s a party-line thing the way they’re using it right now.

This offseason, C.J. Wilson is the best available free-agent pitcher. Some team that believes it’s one decent pitcher away from a world championship is going to sign C.J. Wilson, and that team will likely give Wilson way too much money. If that team’s hunch proves correct and Wilson helps it to the World Series, the proverbial (and actual) flag will fly forever, and the team can rationalize away the last couple of years of Wilson’s deal when he will likely prove a financial albatross.

What Hank said in his email is correct: Teams (especially big-market teams) can build from within and spend on free agents. But since spending money on big-ticket free agents is one of the least cost-effective ways to improve a team, it should probably be the final piece of the process, not one of the first ones. Generally speaking, of course.

And I’d like to remind everyone of one very important point: It’s November 28th.

Come March we will have a better sense of how much money the Mets had to (or wanted to) spend this offseason, and whether the bluster about maintaining a payroll between $100 and $110 million was just that. But don’t confuse rumors — or the lack thereof — with anything terribly meaningful. It could just be that the Mets’ front-office is a bit tighter-lipped than some of its counterparts around baseball, shifting the media focus elsewhere.

Thus far this offseason, only a handful of players have actually found new teams on the open market. Using MLBTradeRumors’ ever-handy free-agent tracker, I put together the comprehensive list of players signed to Major League deals with new clubs:

Look over that list. Not a rhetorical question: How many of those deals do you wish the Mets had made?

I could probably make an argument for a couple of the catchers. If you buy the recent pitch-framing research from Baseball Prospectus, Jose Molina in particular seems like a bargain at $1.8 million as a righty-hitting complement to Josh Thole.

Jamey Carroll’s still pretty useful: Gets on base a bunch, plays all over the field, once was an Expo. But he’ll be 38 on Opening Day and he required a two-year deal.

And there hasn’t been anything close to an obvious miss by the Mets, where the player and terms seemed to perfectly fit their (supposed) budget and needs but they let him slip away. Maybe that will happen, and then we can yell about it and say they were lying to us about the payroll figures and everything else. But right now it’s hard to kill the Mets for not spending money when a) it’s silly to spend money for the sake of spending money and b) pretty much no team has yet spent money.