Not all of the TedQuarters Top Ten Things of 2011 will apply to everyone. I tried to skew them so that the top things most likely to be universally appreciated by readers of this site fall near the top, but the site’s called TedQuarters so you probably realize that these are all just my Top Ten Things of 2011. And I may have missed some, at that. Long year, long last couple of weeks, lots of holiday-shopping still to do.

Anyway, I suspect most of you did not move back to New York City in the last couple of months, so this one might not resonate like Pascucci homering off Hamels or the forthcoming Taco Bell item.

But New York City is awesome, which is easy to forget sometimes. My wife and I moved to Manhattan in November, forgoing the comforts of the suburbs for the convenience and excitement of urban living.

On a sunny day a couple weeks later, I found myself walking around downtown — in pursuit of a sandwich, incidentally. I passed City Hall and snapped a few photos for an effusive couple that had either just gotten married or just obtained the requisite paperwork. Their joy was transparent, unburdened and contagious: Passersby in starchy business attire smoking cigarettes smiled and waited out the short digital-camera delay, forgoing the photobombing opportunity as the couple tried to time their gleeful jumps to the shutter.

A few blocks north, I walked past the Tombs, the city’s longstanding detention complex. From a door on the building, with little hoopla, stepped a man in a black bandana, a well-worn black leather jacket, tight black jeans and black combat boots. I try not to judge people based on their attire and I have no idea how the getting-out-of-jail process really goes, but this guy’s whole look — combined with my inclination to make up stories in my head about strangers, combined with the fact that I actually saw him walking out of a jail — made me suspect I was watching a man leave jail. He looked left, then right, inhaled deeply through his nose, then jammed his fists in his pockets and started walking. Perfectly cinematic, really.

You see stuff like that all the time in the city: The major plot points of other people’s biographies. And everywhere you look there are acts of human decency large and small, and then, of course, people treating each other like crap for no discernible reason. It’s a great place for voyeurism, at the very least.

All that stuff happens elsewhere, obviously, but the way it is compressed by the city’s boundaries amplifies the spectacle. On any given day you can walk around any reasonably bustling neighborhood of the five boroughs and make several new observations about humanity, or at least confirm some old ones.

Plus there’s tons of stuff to do and see, and basically every type of delicious food to eat. So for that, you deal with dodging the occasional pile of dog crap on the sidewalk and the knowledge that at some point you’ll forget to close your blinds before you change and catch some weirdo across the street checking out your balls. Worth it.

UPDATE, 12:00 PM: OK, hold on. I meant to keep politics out of this list entirely (as I normally do on this blog) but upon further consideration I want to include one of my favorite images of the year here, in part because it fits with the whole “New York amplifies people’s peoplehood” theme of the above post and in part because I hate that the long-overdue legalization of gay marriage should even qualify as “politics.” On July 24, 2011, the first day same-sex couples could legally marry in New York, some protesters holding all sorts of hateful signs predictably showed up to demonstrate across from marriage sites. So some smart-thinking, decent people showed up with umbrellas to shield the grooms and brides-to-be from the protests and help the couples enjoy at least a part of their wedding day free of bigotry: 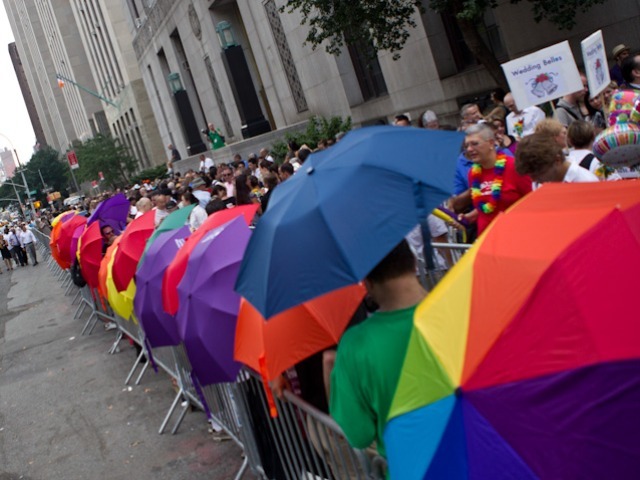