It’s funny or ironic or at the very least interesting that Carlos Beltran’s too-often controversial tenure in Flushing ended with such a universal lovefest. Beltran stayed healthy and productive for the first four months of 2011, got traded to San Francisco before the deadline in a deal everyone knew was necessary, earned praise for his leadership all year and bought his teammates dinner on his way out, and, in a final flourish, returned from the Giants the promising right-hander Zack Wheeler, who now ranks among the Mets’ top prospects. 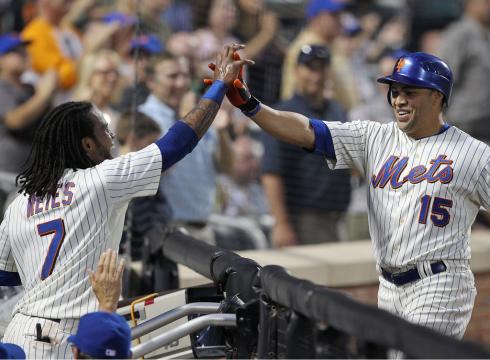 And the positivity surrounding Beltran’s departure especially stands out in juxtaposition with the way the Jose Reyes Era ended in Flushing. Reyes spent large swatches of July and August on the disabled list, returned in September looking tentative on the basepaths, earned talk-radio vitriol by bunting his way to a batting title then asking out of what would be his final game as a Met, and finally shed his Mets blue and orange for the Marlins’ weird sherbet in December in a he-said they-said drama fraught with speculations, allegations and 20/10 hindsight.

But neither exit ranks anywhere near the top 10 things that happened in 2011, so for the purposes of this exercise I must put them aside and focus instead on the awesome things Reyes and Beltran did when they carried the Mets through the month of June.

Reyes was spectacular for that stretch, hitting .385 with a .425 on-base percentage and a .598 slugging. He played the way we always suspected he could if everything went right for him, someplace even above the superstar level he established from 2006-2008: churning out triples, stealing bases, gunning down runners from deep in the hole. It was an amazing spectacle, one you no doubt can still remember if you can block out the image of him in that stupid Marlins jersey, and one I (and many others) wrote about at great lengths at the time.

Beltran was merely regular old Carlos Beltran that month, posting a modest (by his standards) .286/.377/.467 line but, thanks in part to Reyes’ explosion, driving in 26 runs in 27 games. In truth, Beltran performed better in May and July, but I’m using his solid June here to stand-in for his strong final campaign with the Mets.

Because it was in June that the Mets, without Ike Davis or David Wright or any evidence of a frontline starter on the roster, managed a 16-11 record on the strength of 5.5 runs per game from their offense. And 16-11 is hardly a playoff pace (UPDATE: yes it is), mind you, plus one month is a tiny sample and the run totals were bolstered by an absurd four-game outburst and a bunch of role players playing above their heads.

But it was that month, with Reyes and Beltran healthy and playing the way they were, that you could squint at the Mets and dream on them, even if it was often a hopeless dream full of ifs and buts. “If only Wright could…” “What if Davis hadn’t…” “And imagine if Santana…”

It was fun. It was fun to watch, and — for me at least — it was fun in some pathetic way to consider all the better ways it could have played out for the last vestiges of the Mets’ last good team if too much hadn’t been lost to mishandled injuries and mismanaged rosters.

But more than anything, it’s thrilling to see two superstars playing superstar baseball for your favorite baseball team, regardless of that team’s place in the standings. And while great teams can be constructed without multiple capital-s Superstars, and while we can search for and probably find some silver linings in the maelstrom of black clouds swirling around the Mets these days, the truth is it’s probably going to be a while before we see anything like Reyes and Beltran going full-tilt in the same lineup again.