The Giants won yesterday and are bound for the Super Bowl, which is a) very exciting for fans and members of that team and b) yet another reminder that we — and by we I mean me — should really never count professional sports teams out until they’re mathematically eliminated. Hindsight now says otherwise, but the Giants looked as good as dead at multiple points during the regular season.

Anyway, there was an old Dave Letterman gag where he’d take some photograph of a notable event and focus on some rando in the background and say, “But what about that guy?” (He might still do it, I just haven’t watched the show in years.) And anytime the FOX cameras showed Jim Harbaugh on the Niners’ sideline last night, they presented one of the greatest but-what-about-that-guy opportunities of all time. Somewhere behind Harbaugh, at most times, stood some dude in a 49ers shirt with long, curly blond hair that might have been a mullet and a strong, well-manicured mustache.

I asked Twitter for his identity last night and again this morning and got nothing, but it turns out I’m not the only one curious. Brandon Eddy passed along this from Bleacher Report:

No one (at least no one in my circle of sports friends) can seem to figure out who he is, how he got there or what grooming products he must use to make his jaw-dropping hair and handlebar-teaser combo kick so much righteous ass that it delivered a San Francisco 49ers team from 2010 despondency to 2011 postseason-storybook heroism. 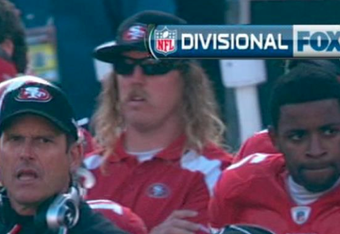 An update to the Bleacher Report story reveals “The Bro” has a Facebook page, which claims he’s an “equipment manager with the San Francisco 49er’s.”

I kind of prefer my friend Dailey’s explanation: