This is what happens when a crazy person catches a cold: 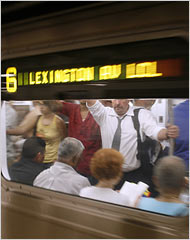 I heard the woman before I saw her, and I assumed her to be the type of sick commuter I judge the crap out of: Someone clearly too ill to be going to work (or really anywhere besides the doctor’s office or the kitchen for a glass of water) who believes herself and her responsibilities too important to avoid germing up whatever mass-transit system she favors with whatever virus or bacteria or fungus is responsible for the disgusting ailment she has clearly come down with.

And look: I’ve been there. It happens. Sometimes you’re out of sick days, sometimes you underestimate how sick you are, sometimes you’re so sick you’re not even thinking straight and you can’t consider any option besides going through your morning routine and getting on the subway feeling awful. Plus, who wants to waste sick days on days when you’re actually sick?

Anyway, I’m hardly a germophobe, but part of having MS means — at least as far as I understand it — if you wind up with some sort of serious illness or infection you could be totally f@#$ing screwed. Not definitely screwed, but it’s not something I’m aiming to gamble with. So I try my best to stay out of harm’s way, and when there’s some woman sneezing and wheezing and hacking in the subway station, I walk down the platform a bit to avoid ending up face-to-face with a coughing mess who could cripple me somehow.

Only this lady was hot on my heels as the train pulled in, and I couldn’t shake her even as I scooted along the side of the car to get to the farthest possible doors. From her array of sick-person noises it wasn’t hard to sense her veering right upon entrance, so I hooked left and proceeded to the middle of the car because I am a responsible commuter.

The train started moving and I unraveled my headphones while she continued with her ridiculous cacophony of grossness. Then, from her general region of the train car, came a commotion and a scattering of passengers.

“She got my suitcase!” said someone with a nasal voice.

Behind a three-deep shield of high-school kids in puffy jackets, I looked toward the woman. She wasn’t the self-important but irresponsible white-collar worker I expected, and it certainly didn’t seem like she was heading to an office. She was probably in her late 40s or early 50s, wearing a black knit hat sitting way off the top of her hat and a long green trenchcoat, and she looked for all the world like she had gotten on the subway specifically to menace people.

The people on the train soon provided her about a four-foot radius of personal space — unheard of on a crowded rush-hour subway. And she used all of it, pacing around, glowering at commuters, and mostly — and I don’t know if there are grown-up words for these actions so I’m just going to use what I called them in seventh grade — blowing snot-rockets and hocking loogies.

Everyone else huddled together as far from her as possible. People abandoned nearby seats and stood in the aisle — their chances of incurring her mucus-wrath lessened by the crowd; herding at its most beneficial.

The guy next to me craned to try to see over my head. He turned to his girlfriend, sitting down but with a much better angle on the woman.

A friend assured her she was safe, then expressed some concern over the condition of his fitted cap.

The woman got off at 68th St., but nobody who was on the train for her spitting spree returned to the area they freed up for her. A couple people got on at the stop and must have wondered why everyone on the train was crushed toward the sides, leaving a big empty space in the middle for them to stand in.

Part of that was certainly inertia: The train’s going to fill up anyway, you’ve already moved once, and it’s just a hell of a lot of effort to move back even if you’re jammed up against a bunch of other people.

Part of it, I think, is a certain and likely misguided type of germophobia: No one wants to stand in the space where they saw the crazy phlegm lady spitting. But of course it’s every man for himself, so no one was going to tell the 68th St. people that they might be wallowing in her hepatitis B, either.

The terrifying thing is that for all we know that type of thing has just happened on every train we get on and we are perpetually the naive 68th St. passengers. I’ve seen people urinate on trains on multiple occasions. Hell, just a couple weeks ago I saw a man vomit up half of his soul on a Manhattan-bound 7 train.

Point is, don’t lick anything on the subway.