But then that’s not exactly breaking news, is it?

– Andres Torres left last night’s Spring Training game with a strained calf. He said he thinks he’ll only be out a couple of days, but a) that’s what they all say and b) it has been like two or three days since a full-fledged Mets-fan freakout so people were getting antsy. 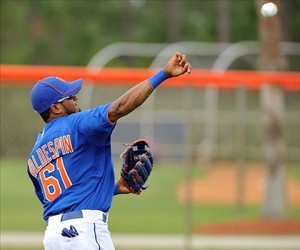 In Torres’ absence, Terry Collins will try Jason Bay and Jordany Valdespin in center along with Adam Loewen and Mike Baxter, who have already been working there. Bay apparently volunteered for the tryout, which is great and all, but actually using him in center field in meaningful games is a terrible idea. Also, if you’re using Bay in center, who is it that’s playing left field and isn’t better at center than Jason Bay?

As for Valdespin, I was ready to pooh-pooh the idea based on the 32 errors he made in 98 games at shortstop last year, which I mentioned yesterday. But then I remembered that BJ Upton was once an error-prone Minor League shortstop too and is now a pretty good Major League center fielder. Obviously the two cases are very different for a variety of reasons, but if the Mets want to move Valdespin off shortstop and feel he has the athleticism for center, it doesn’t seem like it can hurt to try. It’s pretty late in the game to expect him to play there in the Majors by Opening Day, though, especially since he hasn’t yet done anything to suggest he’s a Major League hitter.

I don’t even know that it’s a bad idea from a football standpoint. Tebow can’t really throw, but obviously he’s got some value running the option as a change of pace. Hard to say if it’ll be worth whatever he gets paid, since — as voice of reason Antonio Cromartie pointed out — Jeremy Kerley and Joe McKnight can run the team’s Wildcat offense, too.

But Tebow’s fantastic for web traffic, so there is that to consider.

Also, if this woman has really ditched her man and is now open for Tebow, look for him to make a wobbly pass that falls seven yards short of her or just pump fake in her general direction and take off running.