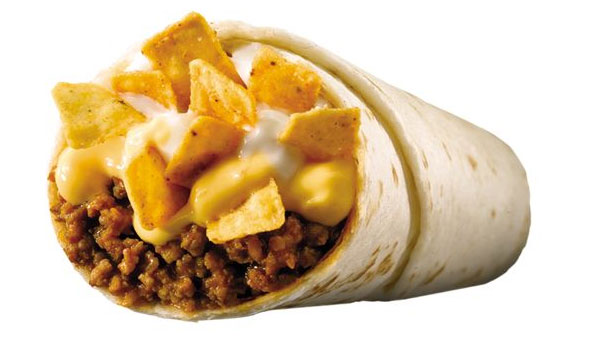 That is the forthcoming Beefy Nacho Burrito from Taco Bell, and from here it looks promising. Inside are ground beef, nacho cheese, sour cream and a brand-new Taco Bell ingredient they’re calling Queso Strips. Per this description, it sounds like they’re “queso-seasoned” tortilla strips, obviously carrying on the tradition of the Crunchy Red Strips and the Flamin’ Hot Fritos that were on the similarly named Beefy Crunch Burrito a couple of years ago — adding crunch to a portable burrito.

The above-photographed burrito isn’t burdened with the rice that hampered the Beefy Crunch Burrito. That’s good. Taco Bell rice isn’t particularly special and generally seems like a waste of valuable stomach space that can be filled with better Taco Bell stuff.

It does seem a little curious that after the massive hype around the Doritos Locos Taco, not to mention the aforementioned Fritos collaboration in the Beefy Crunch Burrito, Taco Bell would create a new “queso-seasoned” tortilla strip in house instead of partnering up with Frito Lay again. But I’ll take that to mean they needed to craft them just right and didn’t trust a third-party vendor with their specifications.