The Mets-heavy edition. Here we go.

What’s your opinion on how the Mets should utilize Mike Baxter at least for the immediate future?

It has been good to see Baxter get some starts over the past week, and he’s earned some more. Plus, though Baxter has seen very few opportunities against left-handed pitchers in 2012, he didn’t really demonstrate much of a platoon split in the Minors. So if Baxter is on the bench for a game, I might rather see him left in to face a lefty specialist in a pinch-hitting spot than see him pulled for one of the Mets’ lesser-hitting righty bench bats (i.e. anyone but Scott Hairston). 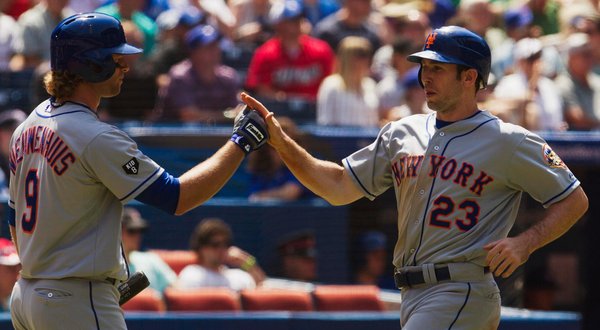 We talked about this some on the podcast that just rolled out: Jason Bay’s probably going to play every day when he returns, at least to start. There are a bunch of reasons for this, some better than others. His contract and veteran status don’t seem like good reasons to play him every day, but they do seem like likely factors. One last effort to get him straightened out so the Mets can part ways with that contract without eating the whole thing does seem like a decent reason.

But if and when Bay struggles against righties — as he did in 2011 and the first couple of weeks of 2012 — the Mets will have to face platooning Bay if they want to win as many games as possible. They’ve got three lefty-hitting outfielders (with varying amounts of upside) who are under team control way longer than Bay and who could feasibly play some role on future Mets contenders. Baxter, older and less-heralded than Kirk Nieuwenhuis and Lucas Duda, is probably the lowest priority for regular at-bats. But he has also performed the best in his tiny sample in 2012.

Unless Baxter is somehow one of the top five hitters in the Majors he’s not going to keep hitting at this clip, obviously. But 27-year-olds with histories of good Minor League hitting do sometimes come out of the woodwork to become productive Major League regulars, so it doesn’t seem imprudent to give Baxter as many opportunities as possible to prove himself. It’ll just be tough to do that, given how many lefties the Mets have in their lineup and how many seem to also merit regular at-bats. The task becomes easier if the Mets do decide to demote Ike Davis.

Big fan of the blog. I was wondering do you think the mets should trade David Wright? and what sort of prospecs could they get in a deal for wright? chipper jonas is retiring, would the Braves be willing to give3 up some of their arms in a package for Wright?

Speaking of which, C. Hamels writes:

If you could traid Val Pascucci straight up for me, would you pull the trigger?

Well, yeah. C’mon now. I hope it’s clear by now that I realize Cole Hamels is about as awesome at pitching as he is at posing for embarrassing photos. Plus, as much as I dislike the Phillies, I’m rooting for Pascucci to get more Major League chances anywhere, and the Phillies could use a bat right about now. Ty Wigginton, of the .639 OPS and the not-very-good defense, is the righty half of their first-base platoon. You’re telling me Pascucci can’t outproduce that?

The Mets could use a starting pitcher, the Phillies could use a power bat and Pascucci could use another crack at big-league pitching. It just makes sense. GET IT DONE SANDY.

Kirk Nieuwenhuis (spelled it without looking it up, how’d I do?) has been striking out in 30% of his at bats. You think he’ll still turn out to be a solid regular?

Nieuwenhuis’ 30.3 percent strikeout rate is nothing extraordinary by his standards; he struck out in 27.4 percent of his plate appearances in Triple-A. He will likely have to improve that if he aims to become a solid regular.

The outstanding baseball-reference play index for whatever reason doesn’t seem to search by strikeout percentage, but to date there have been only 17 full seasons in Major League history in which a hitter suffered an at-bat to strikeout rate as low as Nieuwenhuis’ current 2.9 with an OPS+ above 100 (i.e. league average). Most of them are by three-true-outcomes type mashers: Three by Jack Cust, two by Jim Thome, two by Mark Reynolds, two by Rob Deer, two by Adam Dunn, etc.

Of course, there’s probably some selection bias in play. Ten of those 17 seasons have come since 2006, so maybe, as the Major Leagues warm to the idea that strikeouts aren’t so awful, we’ll see more guys succeed despite extremely high strikeout totals. And maybe, somehow, Nieuwenhuis is one of those guys.

But since Nieuwenhuis is currently the benefactor of the Majors’ second-highest batting average on balls in play, it seems like he’ll have to put more balls in play to keep his batting average and on-base percentage up when that normalizes a bit. But he’s 24 and these are only his first 144 Major League at-bats, so there’s hope yet.