From the Wikipedia: List of tallest buildings in New York City. 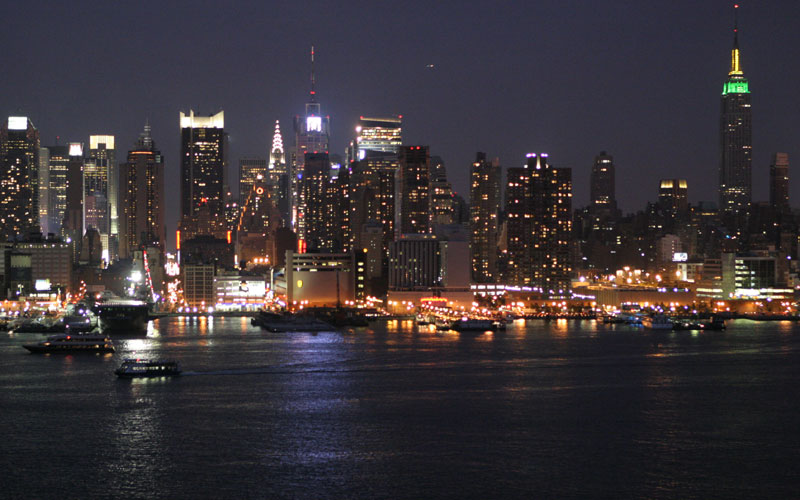 This city’s skyline is awesome. And I mean awesome, here, in the dictionary definition of the term. New York’s buildings inspire awe. That’s not on the Wikipedia page but it’s true. Find me a city in this country with a more imposing, inspiring skyline. Chicago is close, but New York wins on its sheer wealth and density of tall buildings.

To boot: There are 117 completed buildings in this country over 700 feet tall (not including antennae). New York has 38 of them. That makes sense. Because Manhattan is an island, the nucleus of the city could not expand outwards. Instead, it expanded upwards.

New York City’s first skyscrapers were built in the 1890s, some 35 years after Elisha Otis invented the safety elevator. Those have been demolished now, or overshadowed by buildings that grew in the city’s first high-rise construction boom in the early part of the 20th century.

From 1908 to 1931, five different buildings in New York set new world records for height: The now-demolished Singer Building in 1908, then the Met Life Tower (which now serves as a beacon for Shake Shack) in 1909, then the wildly underrated Woolworth Building in 1913, then the Bank of Manhattan Trust Building in 1930, then the Chrysler Building a month later, then the Empire State Building the next year. This happened to be a really fortunate time for a city to be churning out huge buildings, because everyone knows art deco is right for skyscrapers.

The Empire State Building remained the tallest building in the world until the Twin Towers of the World Trade Center were built in 1972 amidst the city’s second skyscraper boom. That era also produced the endearingly ugly Citigroup Center, currently the seventh tallest complete building in the city.

Here’s the interesting part, to me at least: It would seem like, given the cost of living and building in New York City and the trend toward telecommuting facilitated by the Internet, our dedication to making giant buildings should slow. Right? Wouldn’t that make sense?

Not happening, though. Two of New York City’s four tallest completed buildings have been built since 2007 — the Bank of America Tower and the New York Times Building. And if everything goes as planned, by 2016 six of the city’s eight tallest buildings — all but the Empire State Building and the Chrysler building — will be less than a decade old.

Three of the new skyscrapers are already evident in the skyline. One World Trade Center (aka the Freedom Tower), which will top out soon, is already the tallest structure in the city. Four World Trade Center topped out on June 25. One57, which looms over Central Park and piqued my curiosity enough to start looking this stuff up, also topped out last month.

Also under construction, but not yet above ground-level, is 432 Park Avenue. If that building continues as planned, it will be the tallest building by roof height in the city upon its completion in 2016. Why didn’t I know about that until I checked the Wikipedia page? Shouldn’t this stuff be bigger news, than, I don’t know, TomKat splitting up?

And why do we keep journeying upward, anyway? Presumably there’s some better explanation, but I like to think it’s just because we can. Why wouldn’t we want 1,400-tall buildings? And really, if given the option of working from anywhere, who wouldn’t want to set up 70 stories above Manhattan? Have you had the pizza here?