In April, with the help of SNY promos man Brett, I published to YouTube a video of myself singing lyrics I “wrote” to the tune of a Bizet aria. Those lyrics are as follows:

There’s nothing worse than explaining a joke, but the song is nominally about baseball. Its premise is that baseball, like many pursuits, is subject to a hell of a lot of randomness, that our eyes and hearts are gullible, and that the fluctuations in performance from teams and players over small parts of seasons that lure us into believing they indicate something meaningful almost always prove otherwise with more evidence. And if you were to tell me that some baseball player I believed to be very good sucked very hard for 16 baseball games — or vice versa — I would certainly sing to you these words:

So it seems strange to me that the sample-size specter is so infrequently cited in football, a sport that operates in tiny samples and that is, due to the money culture surrounding it, subject to such thorough scouring and forecasting from every barking pregame analyst and bright-eyed online gambler and sniveling office fantasy guru and everyone in between. 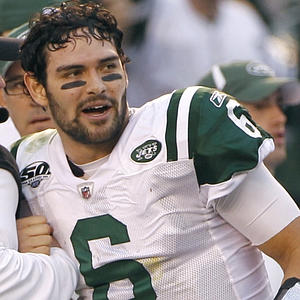 Why should we spare the NFL’s players and prognosticators the prudence we know is required in baseball? Is the game any less subject to randomness? Maybe, but then individual player performances are far more dependent on those of their teammates and opponents, and, in many cases, the officiating. We can see when a player consistently performs well in a system and with a certain set of players around him, but can we ever know for certain he is a great player that will perform as well in another system with other or lesser players around him?

And it strikes me that for a player to establish as much, he must be playing frequently enough to deny the opportunities to his replacements, so it is impossible to know for sure that any run-of-the-mill NFL-caliber player at the position couldn’t step in to the role and, with enough reps, enjoy similar success. Plus, it seems that given the short arcs upon which NFL players necessarily exist, by the time a player can establish beyond all doubt that he is excellent, that may very well no longer be the case.

We strongly suspect Peyton Manning is good. We know he played extraordinarily well for more than a decade as the quarterback of the Indianapolis Colts, and based on what we’ve seen from other quarterbacks and from — in brief spurts — Manning’s replacements, we believe few others would have performed as well as Manning in the same situation.

But does anyone think Peyton Manning circa 2004 would have played like Peyton Manning circa 2004 were he under center for the New York Jets this week and last? And does no one imagine Mark Sanchez — the suddenly gun-shy, inaccurate, altogether not-poised Sanchez — could look a bit better than he has recently (football-wise, at least) if the players around him were as good as the players around Manning back then?

And Peyton Manning is the outlier. Manning’s is the first name that comes to mind to counter any argument suggesting NFL players are more or less fungible products of their systems because Manning is one of the very few dudes who presented ample evidence over plenty of time that he was in fact something more. Manning’s the guy who started 208 straight games. The sample size seems adequate.

Sanchez? We don’t know. Sanchez has started 50 games, sure, but nearly half of them were also started by Wayne Hunter. He has at times been hampered by poor play calling, an awful running game, and receivers that look like they’d drop hand-offs and appeal to the refs for pass interference.

Which is all to note my growing concern that most purported NFL expertise is rooted either in sheer obliviousness or some sort of wink-nod agreement that no one really knows a damned thing about who’s better than whom, and we’re all pretty much full of it but we’re going to keep blustering forward because a) everybody’s watching football anyway, b) it’s a hell of a lot of fun, and c) there’s no actual accountability beyond 50 bucks to the office fantasy guru when our bold predictions go awry.

When I first watched Sanchez play quarterback for the Jets, I identified what I believed to be precocious and intangible presence and judgment at the position, and thought that he would prove great with time. Those qualities faded that season but returned in the playoffs, and then again in the first half of 2010. Now, he looks timid in the pocket, afraid to throw downfield but also afraid of oncoming rushers and afraid to tuck and run. But I know this represents merely a six-game stretch of mostly lousy play for the man, that he has played even worse in the past and recovered, that he’s cast into the spotlight — for better or worse — because of his position, and that, again, he’s getting little help from his supporting cast.

I want Mark Sanchez to be good and I’m not sure he is. I think he has looked worse than he actually is these last two weeks because of some poor play around him, but I am pretty certain he is not as good as vintage Peyton Manning. And I fear none of it will matter all that much as it pertains to this season if the Jets are forced to carry on without Darrelle Revis, whom I can say confidently is almost inexplicably awesome despite all the requisite caveats for his environment, sample size and confirmation bias.