I started putting together a post aggregating as many newspaper and blog articles as I could find asserting that Nick Swisher is mentally weak or buckling under pressure or unclutch or a baby for daring to be honest with the press and admit he doesn’t like being booed by his home fans after providing them four years’ worth of admirable-to-very-good production in regular seasons, but there were hundreds of them and I got bored with it. Many of them sounded like they came straight from the mouths of fifth-grade bullies, too, and didn’t seem worthy of the link. 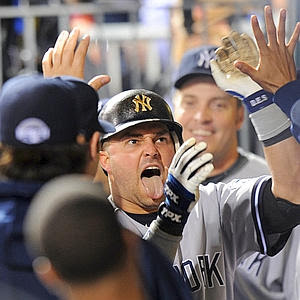 Again: We criticize ballplayers when they give boring, cliched answers to post-game questions, then on the rare occasion they don’t, we spin ’em around and throw them back in their faces. It’s… well, it’s ironic or something. Swisher’s a divisive character, and until this week I can’t say I ever cared for the guy’s brostentatious behavior, but he’s both a human being and a pretty good baseball player and I find it hard to fault him for preferring not to be jeered by them that showed up Sunday.

Next — after some morning meetings — I started parsing through all the ridiculously small samples being used to argue for the benching of good Yankees in favor of less-good Yankees in all those same newspapers and blogs. There are tons of those too, many of them still somehow replete with contempt for the binder of information with which Joe Girardi sometimes makes decisions. Some of them contradict themselves, too, citing Raul Ibanez’s postseason stats where convenient and ignoring his 3-for-29 career line against Justing Verlander while simultaneously pointing to Eric Chavez’s 9-for-25 as evidence that he’s money against the best pitcher in the world.

But you know the song by now, and that’s really all there is to say about any of it. Nearly every postseason line — even Carlos Beltran’s, as much as it hurts me to say — exists in a tiny sample. Derek Jeter, for playing a 16-year career with the Yankees, has about a full season’s worth of postseason experience across which he has performed about exactly as you’d expect him to. He has nearly 200 more postseason plate appearances than any other player in history, and more than twice as many as any other active player.

So I’m left with the last and silliest bit of Yankee news this morning: Alex Rodriguez took time out from his struggles this October to solicit phone numbers from a pair of attractive women sitting behind the Yankees’ dugout on Sunday night. This, naturally, produced many LOLs because A-Rod LOL. If Jeter did it, swoon. Alternately: If Jeter did it, it would never be reported. Alternately, Jeter would never do it because TRUE F-ING YANKEE.

I don’t know why everyone’s just assuming those attractive blondes don’t know about Bill James’ research suggesting consistent clutch-hitting ability to be a myth, and that they weren’t singing the small-sample-size song to comfort A-Rod through his slump.

Also, not for nothing: It’s not like Justin Verlander has never lost and the Yankees have never hit. Sure, he is great and they have recently been pretty awful offensively, but they were among the best offensive teams in baseball this year. Remember?

The playoffs make us something something.