I don’t think the Royals would trade Wil Myers for Jon Niese, but — and like I’ll say on the podcast — the Royals are the team supposedly open to trading Wil Myers, who hit 37 home runs as a 21-year-old in Double-A and Triple-A last season, even though one of its outfielders is Jeff Francoeur. So if there’s anything to this, the Mets should jump on that deal. 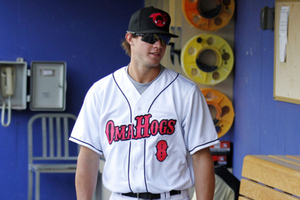 Niese is a good young pitcher signed to a very team-friendly contract. But he’s a pitcher, which means he’s no lock to stay healthy, and he’s yet to throw more than 200 innings in a season.

Myers hit so well in the Minors last year that his Major League equivalency line — .260/.320/.469 with 27 homers if you include his stats at both levels — would have made him arguably the second best hitter on the big-league Mets in 2012. That’s not saying much, sure, but it speaks to how badly the Mets could use more offense. And Myers is a right-handed hitting outfielder with power, which is the main thing the Mets need.

By my best guess, if Myers plays even average defense in an outfield corner, he would have been roughly as valuable to the Mets in 2012 as Niese was, and Myers is still at the age at which players can be expected to improve pretty rapidly.

Typically I’m skeptical of going all-in on prospects who have yet to perform at the big-league level, but Myers seems about as safe a bet as any, given his precocious production and his reputation. If the Royals are so desperate for affordable pitching that they’d trade him for Niese, then, you know, do it. But 74 percent of you already feel that way, so I realize I’m preaching to the choir.