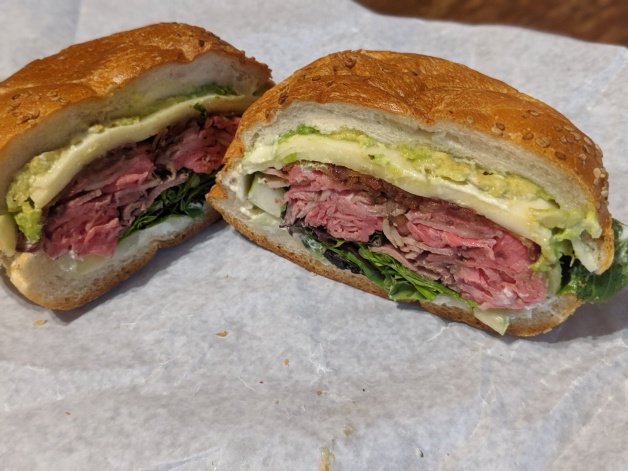 A local go-to, here gone to.

The sandwich: The Sacramento Rancher from Au Jus, a takeout spot with three locations in New York City. The original is on 92nd and 1st in Manhattan, right near where I live, and there’s also now one on Washington and Prospect in Prospect Heights, Brooklyn, right near where I used to live. The third is in East Harlem, not especially close to anywhere I’ve lived, but still sort of close to where I currently live.

I get mine with fontina cheese, always. There are options for other cheeses when you order online, but I chose fontina the first time I had this sandwich and thereupon concluded that fontina is the correct cheese here. I have had this sandwich dozens of times, and I don’t think I’ve ever even considered another cheese. Delicious cheddar? Bah! This sandwich is for fontina.

Important background information: My neighborhood keeps losing great dining options. I assume it’s that the rent is too damn high. My preferred bodega closed just after the 2nd Avenue subway opened in 2017, and the space remains empty. In the past year, a beloved local Chinese restaurant, a favorite neighborhood pub, a delicious Thai soup spot, and a swanky (for the area) Cajun place I enjoyed — all within a couple blocks of my apartment — all closed or had kitchen fires and never reopened. Even the Instagrammed-up Filipino fusion spot run by a Kardashian associate went out of business.

Like most of New York City, the neighborhood always sees a lot of storefront turnover, but the recent rash of closings appears too big and too widespread to be happenstance. It seems like something’s probably broken. All these places were well-trafficked and none of them were especially cheap. Whatever the issue, it sucks. The whole point of living in the city is to be able to have a million delicious food options in walking distance, and now it feels like there are only 500,000.

Au Jus has become a mooring buoy in these turbulent culinary waters, as reliable and delicious a takeout option as exists in the neighborhood. The Sacramento Rancher is not their only excellent sandwich, but it’s the one to which I keep returning, and the one I crave fortnightly. I don’t know why it’s called the Sacramento Rancher. The top Google return for “Sacramento rancher” is this sandwich.

How it tastes: I haven’t mapped this all out yet, but if you were to do a whole big sandwich taxonomy, I think, you’d have an entire phylum of what I’d call the Lunchmeat Sandwiches — those, like this one, built around a thinly sliced pile of some meat that is prepared for just such purposes.

And while there are obvious exceptions, I think that in the majority of the Lunchmeat Sandwiches, the lunchmeat itself is sort of secondary to the sandwich accoutrement: the cheese, the vegetables, the sauce, the (if applicable) bacon. Right? You’re never thinking, “oh man, that sliced turkey really made the turkey, bacon and cheese hero phenomenal.” The turkey is there, laying an important foundation, but it’s the cheese and bacon you really notice.

The roast beef at Au Jus is a showpiece lunchmeat that could carry a sandwich on its own. The rest of the stuff is great — and I’ll get to it — but they could just put the roast beef on a decent roll with some butter and I’d call it a Hall of Famer. Honestly, they could just wrap a big pile of this meat in butcher paper and tell me it’s a sandwich and I’d call it a Hall of Famer. It’s somehow always rare, which baffles me as a former deli man, and it’s so moist and tender and beefy that it feels closer to carpaccio than anything you’re taking home by the pound from the supermarket.

But then also there’s the other stuff, and the other stuff, here, is downright inspired. The bacon adds crunchiness, saltiness and smokiness. The fontina presents itself with creaminess and flavor but does not overpower, the avocados make the whole thing mushy and moist, the cucumbers add a little sweetness and texture.

Even the lettuce is dope. And the horseradish cream ties it together with tanginess and a hint of peppery, back-of-the-mouth spice. The bread is hearty but soft, perfectly crafted to teeter on the brink of messy sandwich destruction without ever actually falling apart.

Eat this sandwich, friends. Maybe — hey, here’s a nice day out! — take the Q train up to ol’ Yorkville, pick up some sandwiches at Au Jus, and have a little picnic on the southbound ferry from 91st Street while you take in spectacular views of the east side of Manhattan. Have you been on the ferry? It’s unbelievable. You get to ride on a boat for $2.75. Feels like cheating.

Hall of Fame? Yup. There may be a run of Hall of Famers in the coming weeks, as I’ve had some time to bank them.