Stock-photo tablet and overalls man, for no reason whatsoever. (Photo by Andrea Piacquadio on Pexels.com)

This morning, while I pedaled up the 1st Ave. bike lane, I felt on the cusp of making some brilliant connection between one of the things I love about baseball and one of things I find most frustrating about the coronavirus shutdown. Then, with no inciting incident whatsoever, I went flying over my handlebars.

Don’t freak out, Mom: I’m fine. I was wearing a helmet, and playing football for my entire youth taught me how to tuck in all my body parts when I fall. I have some scrapes and bruises and it kind of looks like I got punched in the nose, but mostly I’m just stunned that it happened.

I’ve been on a bike at least 3,000 times in my life, easily. I’ve been doored. I’ve been clipped by cars. I’ve fallen off to the side while avoiding hazards, and I’ve tumbled over when my wheel got caught in a trolley rut. But the first time I’ve ever flipped over my handlebars was this morning, on a day when seeking medical attention for anything but the gravest of illnesses makes you an a-hole, while the roads were close to empty, in a spot where I’ve biked hundreds of times before.

And I wasn’t biking recklessly! Best I can figure, if anything besides total randomness caused it to happen today, it was that I was riding my wife’s bike because my own has a flat (the ‘rona has prevented me from getting it fixed), and it’s balanced a bit differently than mine. Also, maybe, I got lulled into a false sense of security by how few cars and pedestrians and other cyclists are around. I felt like a damn fool, either way. Still do. I’m going to be more careful next time.

That’s an excuse for my inability to better connect the following two facts, which I know to be related somehow:

1) There are obviously different levels at which the coronavirus sucks, and I still don’t want to complain too much while me and my loved ones are all (knocking wood) healthy. But one of the things I find most frustrating about the shutdown is the lack of a clear end date.

I recognize that the nature of such things is that we will not and should not get a clear end date until it’s nearly upon us, so I’m not asserting that someone should give us some official quarantine release day before science can offer one. I’m just saying, I think this would be a lot easier to bear if I could know exactly when I can do stuff again.

Think about it this way: For some reason, you are put in charge of the coronavirus — possibly because A-Rod turned down the job. And Ron Science, unimpeachable King of Science, tells you that you have two options:  A) You could let this all play out — keep everything closed, maintain social distancing, etc — to see what happens and maintain hope, without certainty, that the virus runs its course or has some sort of cure by early June. Or B) You can agree to keep everything shut down until exactly July 16, at which point you can safely go outside.

I’d definitely choose B. If I knew precisely how long this was going to last, I could better map out how to spend this time, and I’d have something to look forward to when it’s over. Part of what makes having to stay inside all the time and avoid human interaction so harrowing is not having any idea how long it has to last. 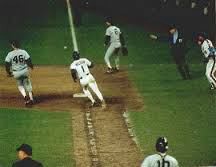 2) I have very little interest in watching sporting events when I know the outcome. I DVR every Georgetown basketball game so I can start watching a little late and fast-forward through commercials, but if I see a phone notification with a score update, I always wind up advancing until the score is the one I just saw.

Same thing with baseball. I think a big part of sports’ appeal to me is that they’re unscripted; no one knows what’s going to happen, and then you watch it unfold at the arena or in the stadium or on your television. Sometimes it goes your way and sometimes it doesn’t, sometimes it’s thrilling and sometimes it’s anti-climactic, but it’s always spontaneous and urgent.

I don’t begrudge people their right to enjoy baseball however they want to enjoy baseball, and I certainly understand why MLB Network and SNY and other outlets in the business of broadcasting baseball games might re-air “classic” games for as long as there are no new ones.

But I’m sure that if someone gave me the choice between rewatching Game 5 of the 2017 World Series — maybe the best and wildest game I’ve ever seen — or checking out some random, hard-fought Twins-Tigers tilt from June, 2009, I’d choose the latter unless the person spoiled the final score or told me why it was worth watching. It might take some mental gymnastics to convince myself it was happening live, especially once I saw Nick Punto, but at the very least it’d be new to me.

Would you rather watch a "classic" old sporting event with a known outcome or a random (albeit good) old one in which you don't know what happens?

1 thought on “Make it up as we go along”