My wife pointed out recently that this crisis doesn’t seem to change personalities so much as it amplifies them. I think that’s right: People who are usually assholes are now acting like outrageous assholes. People who are typically friendly are being extremely friendly. Trouble is, it’s hard to tell one group from the other when everyone’s wearing masks.

When I am out and about in New York City in normal times, I am neither mean nor nice so much as I am dedicated to not inconveniencing people. Call it my own implementation of the Golden Rule: I do not wish for people to treat me with outgoing kindness so much as I wish for them to not block my egress from the subway.

So right now, I find myself trying very hard not to get in anybody’s way, which is difficult to pull off while shepherding around a 2-year-old who can’t grasp the concept of social distancing or the measure of six feet. Lots of people seem rightly paranoid about letting him or me get too close, but some are pretty cool about it and some are way less cool about it, and, again, it’s impossible to guess how people are going to react when their faces are covered.

This morning, I was walking along a narrow path in Central Park when the boy started to melt down a little. A moody kid, in my experience, is far less apt to take instructions, less willing to be gently tugged away from strangers by the hood of his coat, and generally more demanding. And it so happened that a masked man with a dog was coming our way right as I could tell things were about to get hairy.

Wanting to give the guy and dog as wide a berth as possible, I pulled my son toward me. As I did, he spotted my phone peeking out of the cupholder on his stroller, pointed at it, and demanded I play a song on it. This is something he does sometimes, and most of the time I can figure out what song he means, either because he knows the title — “Down by the Bay,” “Wheels on the Bus” and “Everyday People” he has down — or because I know his name for the song — “The Train Coming Song” is “Folsom Prison Blues;” “Are You My Sunshine?” is “You Are My Sunshine;” “The Talking Heads” refers, oddly enough, to Al Green’s version of “Take Me to the River.”

Not realizing that “The More We Get Together” is, in fact, the name of a song, I tried to get him to clarify what he meant.

I realize this anecdote is so delightful as to seem unbelievable, especially given the extremely on-the-nose choice of song, but it really happened, on a path just west of the Alice in Wonderland statue, roughly four hours ago. Made the kid’s morning, too. People aren’t so bad sometimes.

The construction: All those things I just said. Should I start coming up with names for my homemade sandwiches? Probably.

Like last time I did a roast beef sandwich, I roasted the beef myself using a rump roast I got from Crowd Cow. Like last time, I will now shill for my own Crowd Cow referral code, with which you and I can both get $25 off our next meat purchases. A bunch of people have already done this, and I am extremely appreciative — both because it has provided me with a ton of free meat and because it allows me to consider myself a meat influencer. It’s not just beef, either. Thanks to the people who bought meat with my referral code, forthcoming Sandwiches of the Week will likely feature chicken breast and ground lamb.

This time, I followed this pit beef recipe a little more closely. And this time, I still had cornbread left over from Easter on the day I roasted the beef, so I served it as straight-up roast beef the first day and made sandwiches the next.

This worked out well for me, as it meant that the roast beef was cold when I sliced it up for sandwiches the next day. Cold roast beef is way easier to slice thin.

I made the avocado-ricotta spread by combining a slightly overripe avocado with some ricotta I needed to use before it went bad. I included a pinch of salt, too, out of habit. It turns out this is a pretty incredible sandwich spread — it’s a little wetter, creamier and tangier than if you just used straight up smashed avocado, but more colorful and flavorful and less goopy than ricotta alone.

Fried garlic is what it sounds like. I made mine by slicing up garlic as thin as possible and pan-frying it in oil. I think I had the oil at slightly too high a temperature, as I scorched the garlic a little bit.

TedQuarters completists with incredible memories might remember “pico de lettuce” from this 2012 Hall of Famer from No. 7 Sub. That was before I met No. 7 Sub sandwich guru Tyler Kord, talked sandwich theory with him, and convinced him to make me a sandwich — all of which you could still watch if websites everywhere weren’t so dedicated to using fly-by-night in-house video players instead of just sucking it up, giving YouTube some of their ad money, and having people actually watch the videos they spend so much time and energy making.

Important background information: I don’t know much about the ethics of recipe-heisting. I know that excerpting from books is generally OK, but would it count as excerpting if I just lifted the entire recipe for “pico de lettuce” from the No. 7 Sub cookbook and shared it with you, free of charge? Feels like a lousy thing to do to a guy who once gave me a sandwich.

Also, the guy Tyler Kord is an actual, culinary-school trained chef who knows what he’s doing and I’m some bored shmo in his apartment trying to figure it out. I modified the recipe for pico de lettuce — his used romaine, but I used butterhead lettuce because it’s what I had, and I added some shredded Brussels sprouts to try to give it a little more crunch. I can’t tell in good conscience tell you what I made without crediting his recipe, but I’m at least mildly concerned that if I relay to you what I made, some Grand High Master of Chef Society will see it and be all, “Kord told this guy it was OK to mix Brussels sprouts and butterhead lettuce? That’s a clear violation of Statute 79.2b! Oust him from the club and shame him in public.”

I feel comfortable saying that, in the book, Kord explains that he made up the term “pico de lettuce” because it sounds better than “old salad,” and that — as I suspected in the 2012 writeup — it is, in fact, “some sort of dressed lettuce.” I will also say that, in times like these when you are presumably trying to come up with interesting new ways to combine the mundane foods in your pantry, A Super Upsetting Cookbook About Sandwiches will be your gospel. Buy the guy’s book so I don’t feel bad trading on his ideas. Save the beef and the bread, every element of this sandwich is at least influenced by something I saw in there. 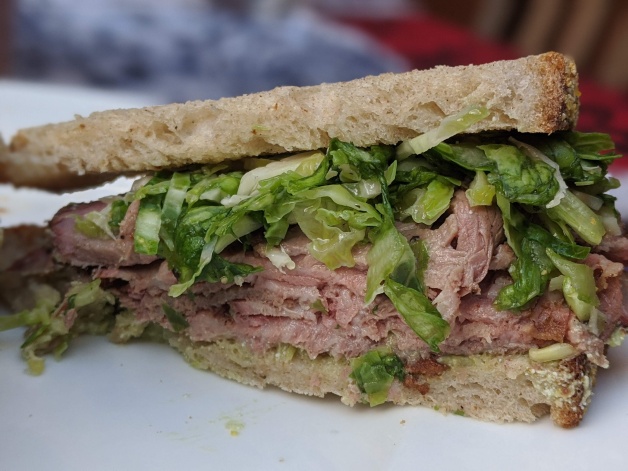 How it tastes: Great!

First, regarding the part of this sandwich I had nothing to do with: The sourdough (from a brand called Heidelberg, via my freezer) is a huge upgrade over the wheat bread I’ve used for previous quarantine sandwiches. It’s a bit more dense, which is a good thing for holding together under duress, and it’s got a pleasant chewiness to it, more flavor, and it’s not as dry.

The roast beef was remarkably tender, and the smoke flavor I got from following the above-linked recipe just barely poked its way through all the other tastes here.

The interplay between the fried garlic and the avocado-ricotta spread, if I may say, is fabulous. The crunchy, pungent garlic adds both texture and flavor, and perfectly complements the creamy, mild spread upon which it rests. Because I overdid the garlic a bit, I think, there’s a hint of an unpleasant aftertaste, but not nearly enough to derail the sandwich.

And the pico de lettuce, as it did on that 2012 sub, just really shines as a sandwich topping. It’s got some acidic bite without overpowering the sandwich, it’s got some crispiness, and it’s moist without turning the bread into a soggy mess. I happen to think the shredded Brussels sprouts were a nice add, as they gave it a bit more crunch.

It’s a delicious sandwich, but if I were making it again, I might search for a way to add a tiny bit more oomph. I don’t know if that means something of contrasting temperature — a hot item to go with all these cold things — or something a little spicy or something a little sweet. Just something. And not too much of it. There’s already a lot going on here.

Hall of Fame? Not quite, though I can’t exactly explain why. I think this sandwich has all the elements of a Hall of Fame sandwich, and it would have gotten there if I perfectly executed all of them. But I stacked the roast beef a little thick in the middle and a little thin on the edges, I burned the garlic a bit, and I probably should’ve put the avocado-ricotta spread on both sides.

Also, you really can’t put too many of your own sandwiches into your own Sandwich Hall of Fame without trivializing the entire institution. I’m going to have you believe that I’m so talented a cook and conceiver of sandwiches that I can just churn out all-timers on the reg? C’mon.