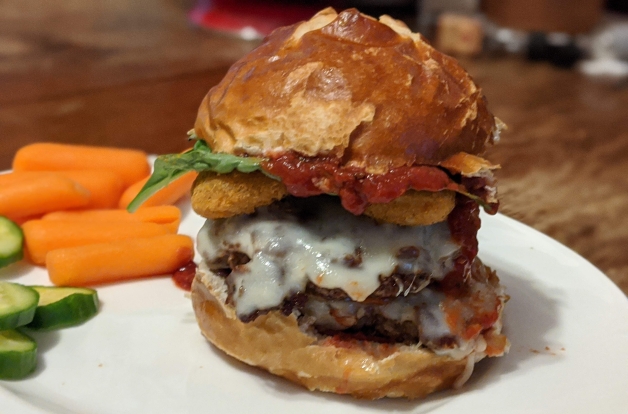 I’ve been thinking a lot about pizza burgers lately, as one does. And the main thing I’ve been thinking about pizza burgers is that I’m not sure I’ve ever had one that wasn’t at least a little bit disappointing. When you attempt to combine two of our very best foods into one, you set expectations enormously high. And too often, I have come out of the pizza-burger experience thinking I’d have preferred a pizza or a burger served independently of one another.

I’ve enjoyed pizza burgers, for sure, as all the standard components — ground beef, mozzarella cheese, tomato sauce — are tasty and complementary. But they always seem to lack some necessary oomph: Tomato sauce is too thin to be a perfect burger condiment, and mozzarella, while amazing, is too mild to offer the amount of flavor you’d get from American or cheddar or Monterey Jack.

I set out to rectify all that this week.

The sandwich: Pizza Burger a la Ted. Wait, no: The Pizza Berger. There it is.

I started with a pound of ground beef from Crowd Cow, where you’re still welcome to use my referral code and get us both $25 worth of meat. I seasoned it with a lot (probably around two heaping tablespoons’ worth) of grated parmesan cheese, some chopped fresh oregano (maybe a tablespoon), plus maybe a half a teaspoon each of black pepper and garlic powder. Then I divided it up into five patties, two of which went on my burger.

As the son of an Italian woman, I judge the heck out of jarred tomato sauce. I’m more lenient when it comes to pizza sauce, but I still prefer to have control over what goes in there. So I started with a half a can of tomato sauce — the extremely bare-bones kind available from the same companies that sell canned tomatoes, generally found among the different varieties of canned tomatoes.

I put it in a small pot over low heat, gussied it up with some dried oregano, black pepper, garlic powder, crushed red pepper (i.e. all the things you sprinkle on pizza), then — and I think this part’s important — I hit it with a heavy splash of balsamic vinegar. This may be sacrilege, or some breach of cooking fundamentals. But the way I figured it, if tomato sauce usually lacks the assertive, vinegary sweetness that ketchup provides a traditional burger, balsamic made for a good and thematically consistent way to add sweetness and vinegary flavor to a pizza-burger sauce. And putting it over heat let it cook down a little, thickening it up. 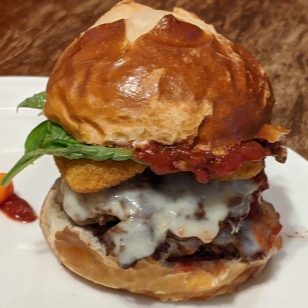 I used Friday’s brand frozen mozzarella sticks for a simple reason: They’re flat, and I didn’t think a round mozzarella stick would stay on top of the burger. The idea to explore the use of mozzarella sticks on sandwiches, which set this project in motion, came from O.G. TedQuarters comments-section mainstay Catsmeat, who’s a real dude that I’ve gotten sandwiches with and not actually named “Catsmeat.”

What I would have preferred to salami would’ve been the big, slicer friendly pepperoni we sold at the deli back in the day, but Fresh Direct seems to only offer tiny pepperoni, and I didn’t want to deal with all that. Fresh mozzarella cheese is obviously superior to slicing mozzarella, but I wanted thin slices and know that the latter is a little saltier and tends to melt better.  The basil is basil.

Important background information: This was my first go-round with the Pizza Berger, and also my first time cooking burgers on a new toy I got myself. I’ve been grilling so much that I decided I deserved a cast-iron attachment for my grill, and I’ve already used it successfully to cook steaks, shrimp and asparagus. But “smashburgers” seem very of-the-moment right now, and even though I have no idea why forming meat into a ball and then squishing it on grill should be preferable to just forming meat into a patty and laying it down like it is, I decided to make these smashburgers.

But you know what? There’s a big, bottle-opener shaped hole in the back of my grill spatula, and I had my fire really hot. Smashing the burgers turned out to be a dangerous and somewhat painful experience, and it took enough time that it prevented me from getting the salami on the skillet as soon as I’d have liked. And that was bad, because it turned out it takes significantly longer than I would’ve guessed to grill salami until it’s crispy. The salami needs basically the same amount of time on the cast iron as the burger does. Who knew?

How it tastes: Better than any pizza burger I can remember, honestly, and also, quite a bit like a meatball hero. I don’t know at what point a pizza burger becomes a meatball parm sandwich and I’m not sure which side of that line this falls on. But I’m certain that the line doesn’t matter in any way, and this is good food.

There’s just no shortage of flavor here. The cheese and seasoning in the burger kicks the beef up to meatball territory, though still with burger texture, and the sweet, peppery, vinegary tomato sauce absolutely achieved the effect I was going for when I modified it. The crispy texture of the salami mostly got lost and the salami taste pretty good job of hiding, but it’s there when you look for it, offering pleasant but fleeting hints of that familiar salty beefiness.

Basil is such that two leaves of basil are enough to prove one of the dominant flavors on this thunderous sandwich, but luckily the flavor of basil is incredible and adds some pungent spiciness here. And the mozzarella sticks, perhaps the boldest addition to this sandwich, successfully maintain some of their crunchiness despite all the moist things around them, plus they ooze out creamy melted mozzarella cheese that joins all the other creamy melted mozzarella cheese that is already obvious on this burger.

Also, the pretzel rolls FreshDirect sells turn out to be pretty excellent. They did a heck of a job here holding together and maintaining the sandwich’s structural integrity.

Still, there are some things I could’ve done better. As mentioned, I would’ve liked to give the salami a little more time on the grill to get crispier. I was hoping it would do the job bacon does on a bacon cheeseburger, but it just didn’t have anything like that type of crunch.

And, while it feels strange to write this, I think I may have used too much beef. This is often an issue for me while making burgers — a pound of ground beef is more than my family needs for a single meal, but not nearly enough for two meals, so I’m stuck in an in-between zone. In this case, I think, the ground-beef-to-other-stuff ratio was a bit too high, and I certainly didn’t need the extra beef to make this a meal-sized burger.

Hall of Fame? Not quite. It has all the elements of a Hall of Fame sandwich, but the execution wasn’t right. Still, it’s a step forward.