Over at Baseball Nation, Rob Neyer and Jason Brannon debate whether Albert Pujols could be older than his listed age. 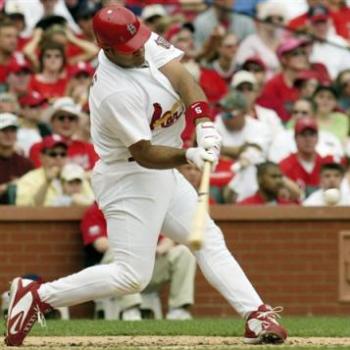 Brannon — arguing that he is older — makes one very good point: If Pujols were admittedly 17 or older when he immigrated, he would have been ineligible for high-school baseball and thus unable to put his ridiculous awesomeness* on display for college coaches.

But Brannon keeps coming back to a couple of silly arguments, namely that Pujols supposedly lied to his wife about his age to get a date, and that there must have been a reason so many scouts missed on Pujols.

Telling little lies in pursuit of the opposite sex is a tradition that long pre-dates Pujols’ entrance to this country, and is in my opinion very, very different than lying about your age for professional gain. Not that it necessarily means Pujols didn’t lie about his baseball age, only that the two things probably have nothing to do with each other.

And as for the scouts, they straight-up screwed up. Even if Pujols were several years older than he claimed to be, he was still destined for a Hall of Fame career. Say Pujols is, I don’t know, 40 years old right now. Say he was 28 when he was playing JUCO ball in 1999 and 30 when he was ranked the 42nd best prospect by Baseball America. He was still on the brink of dominating Major League pitching for at least 11 seasons. That’s a massive whiff by scouts everywhere, no matter how old he was.

Also, Brannon notes that Pujols’ OPS+ has been in decline for four straight seasons, which is true. What he fails to mention is that the first two of those — 2008 and 2009 — were the best two of Pujols’ career by that stat, and they correspond with what are supposedly his age 28 and 29 seasons. So nothing really out of the ordinary there.

There’s certainly plenty of empirical evidence to suggest Pujols is older than he says he is: He looks it. But there were two dudes in my middle school with a full meadow of chest hair by seventh grade. (I know because their gym lockers were on either side of mine and it made me very uncomfortable.) Maybe Pujols is just one of those pubert guys, as unlikely as it seems.

Finally, I wonder to what extent it matters. Pujols is such a bizarre outlier in terms of talent and consistency and healing ability that maybe there’s some chance he is 35 and he’ll still be pretty awesome six or seven years from now anyway.

Or maybe he’s actually 31 and he’ll start falling apart sooner regardless. Until we have more concrete evidence, this is all just speculation — some of which might factor into some teams’ decisions while pursuing him on the open market, but none of which should affect the way we appreciate the tremendous things he has been doing for the last 11 seasons.

*- But the ridiculous awesomeness itself probably does not hold up as evidence of Pujols’ advanced age. This is Albert Pujols we’re talking about, no? We’ve all seen the Bryce Harper video, and Harper hasn’t yet proven to be a Top 10 All Time hitter. Smart money says Albert Pujols looked pretty damn impressive playing baseball at every age. And there are plenty of stories of various future greats needing to show birth certificates in Little League.

2 thoughts on “So how old is Albert Pujols really?”