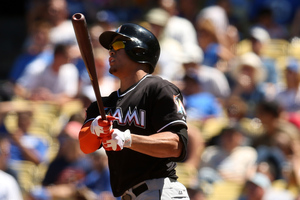 Twitter’s already past backlash to the deal and moving past backlash to backlash to the deal, but the move appears to make a hell of a lot of sense for the Blue Jays in the short term. Presumably, with the Yankees aging rapidly and facing an Opening Day without Derek Jeter, the Red Sox languishing and the Orioles no lock to repeat their 2012 success, Toronto GM Alex Anthopoulos spied a window in which his team could make a postseason run and threw it open. Buehrle and Johnson will upgrade the Blue Jays’ rotation and Reyes will do all the things you know Reyes can do in front of still-awesome Jose Bautista and now apparently awesome Edwin Encarnacion.

The Marlins don’t seem to be motivated by winning baseball games so much as saving — and making — money, so the trade works for them too. They shed the bulk of their longterm payroll commitments. And though none of Nicolino, Desclafani and Marisnick appears close to contributing much at the Major League level, neither do the Marlins, and all show some potential.

That Tweet inevitably inspired tons of speculation that Stanton could also be traded, but dealing a young, cost-controlled masher that represents the team’s only real draw doesn’t appear to make any sense for Miami. Unless Stanton demands it — and maybe even if he does — he won’t be traded. Plus, if the Marlins do for some reason decide to dangle their original Home Run Thing, every single team in the league will want him. No Major League club would not massively benefit from the addition of Giancarlo Stanton, and no club could not afford his salary. The cost would be — and should be — as tremendous as any of Stanton’s moonshots.

Still, because Stanton is a young, cheap, right-handed-hitting outfielder with power and thus represents all of the exact things the Mets need and then some, it’s sort of impossible not to dream on a scenario wherein the Mets could somehow swing a deal for the slugger. The Mets add Giancarlo Stanton and nearly all of our concerns disappear. Replace Jason Bay with Giancarlo Stanton in an offense and it goes from Sufjan Stevens to AC/DC in one thunderous stroke.

But, again, even if Stanton were on the proverbial table — and what a table it must be, to support his might — it would be difficult for the Mets to put together a package of players to meet the Marlins’ needs that would better those offered by every other big-league club. I suppose you could start with Jon Niese and Zack Wheeler and work from there, but I doubt that’s nearly enough, the Marlins already have Logan Morrison so they’re all set on slow-footed lefty-hitting first-basemen types, and Niese’s team-friendly deal would become the Marlins’ largest longterm salary commitment. So I don’t know. It’s hard to even speculate, as there’s just not much precedent for dealing a player like Stanton at this point in his career — or, really, for a lot of what the Marlins do.

That’s where we come in.

Marlins owner Jeffrey Loria, you may know, got his start in the business world as an art dealer. Per the Wikipedia, his personal collection includes works by Pablo Picasso and Henry Moore. And here in Midtown Manhattan, not three short blocks from where I currently sit, in a fourth-floor gallery at the Museum of Modern Art, sits a version of Edvard Munch’s The Scream that recently fetched nearly $120 million at an auction.

Now, look: I don’t typically think art-thievery is a decent or reasonable endeavor, it’s just that this particular one is about the greater good. Plus, I saw this version of The Scream on Saturday and found it underwhelming. The same is actually true of nearly every iconic work of art I’ve seen save Guernica: They’re reproduced so often and elevated to such eminent stature that braving the crowds to check them out in person ultimately disappoints. I appreciate representations of existential terror as much as anybody, but The Scream looked exactly as I knew The Scream to look, and was, in my opinion, not even the most impressive of Munch’s drawings on display. Also, there are three other versions of The Scream on display elsewhere, so it’s not like we’d be robbing the viewing public of its only opportunity to see for itself.

I’ve never successfully executed an art heist before, but I’ve got value to the group as a face man, an organizer, and an explosives expert if need be. Based on what I understand, we’re probably going to need at least someone who rappels (Cashman?), someone who can hack into security systems, a strongman, and a driver. Also, it would probably help if we had at least one dude who’s in it for one last score, maybe a beautiful woman, and someone who knows how to plan heists.

Then, once we have The Scream in our possession, we pull off the greatest art heist of them all: Trading it to Jeffrey Loria for the greatest work of contemporary American awesomeism, Giancarlo Stanton, an achievement so grand it defies reproduction in any media beyond the one in which it exists, baseball-crushing.