@OGTedBerg If you could pick any one crazy exotic animal to keep as a pet, what would you choose?

Well, if we’re considering my current living situation, I’m pretty limited. The apartment’s cramped enough with just two of us in it, so as badass as it would be to have a white tiger skulking around — and as much as that would fit with the decor — it just wouldn’t be practical. And I’d say a small monkey of some sort because monkeys are hilarious, but we know from Beltran that monkeys can wreak havoc on apartments and I’ve got a large outstanding security deposit. So I think I’d go with a two-toed sloth, just chillin’ out on top of our bookshelf, bothering no one, cracking me up with its apparent laziness. Look at this thing: 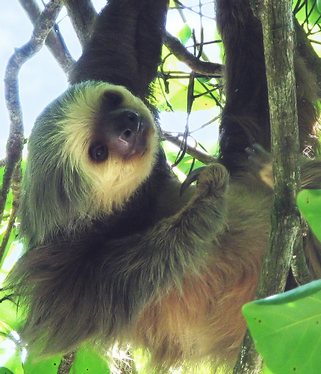 If I had a lot more space, I think it’d be cool to own an elephant because you can RIDE elephants. What if you lived in some quiet suburban town somewhere, and you’re setting off on your sorry little day, and who’s blocking your route to the train station but me on my way to the deli on the back of my trusty three-ton elephant? The only issue is elephants in captivity make me and everyone else who has seen Dumbo very sad.

For those of us who celebrate Christmas, it’s Christmas. Thanksgiving at my parents’ house is typically better than Thanksgiving elsewhere because my mom’s Italian and serves delicious Italian food alongside the traditional Thanksgiving fare. But turkey is pretty wildly overrated and not nearly worth the build-up. The sides are still good, and in principle I support a holiday based on sitting around, eating and giving thanks for the things you have.

I’d still put Thanksgiving up against most holidays, though.

@OGTedBerg why are pants a thing

Near as I can tell, pants are a thing because it’s difficult to ride a horse in a tunic and because a strong breeze up a kilt can get awfully chilly in wintertime. But I’ve been pretty consistent in this, I think: Once our oppressive society deems it appropriate for men to wear skirts to work, I will wear a skirt to work.

I try not to complain about any aspect of my job because I realize plenty of people don’t have jobs to complain about and because mine is a sweet job in which I get to write about baseball and the atrocities of mandatory pants. But I’ve been pretty open in my distaste for this office’s dress code, which states that men must wear non-denim pants even when their responsibilities are limited to editing websites and rarely having anyone outside their immediate vicinity in the office seeing the lower halves of their bodies. It’s like they have no idea how much my output would increase and improve from the comfort afforded by shorts in the summer and jeans at all other times. Man, I hate pants. Quoth me:

If you're supposed to dress for the job you want, I should show up to work pantsless like I'm an eccentric billionaire.